Rev. Daniel F. Monaghan was transferred to Milan from Keithsburg on September 19, 1924, by Bishop Edmund Dunne, D.D. Fr. Monaghan was instructed to purchase property in the village and build a new church. He made arrangements with the village council to rent the town hall each Sunday and Holy Day for the celebration of Mass. The first Mass was said in the town hall on September 28, 1924, with about 300 people in attendance.

A lot for the church and rectory, known as the Vanderslice property, was purchased from Walter Walker. The laying of the cornerstone took place on July 26, 1925, with the first Mass celebrated in the new church that November. The formal dedication was on May 31, 1926. The architecture included an oak-beamed cathedral ceiling and a stone replica of a beehive above the front entrance. The beehive represents St. Ambrose, who was a beekeeper and had his days as a lecturer cut short because of bee stings to his mouth that rendered him mute for a time.

The purchase of joined property to the south for the Parish Center was completed in 1962. Construction began on August 22, 1962, and was completed in February 1963. The dedication ceremony was on May 12, 1963.

In 1962, the western boundaries of the parish were divided to establish the current St. Patrick’s Parish. From 1962 until 1977, while a church was being constructed and the parish established, it remained a mission of St. Ambrose. In 1965, another division of the parish boundaries was made to the east to prepare for the eventual new parish growth in the Coal Valley area. On July 2, 1967, the first Mass of the newly formed St. Maria Goretti Parish was said. It too remained a mission of St. Ambrose while becoming an established parish in its own right during the 1970s.

Date listed is when service as pastor began 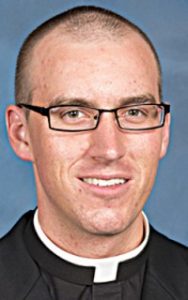